Le Tombeau de Couperin follows a pattern previously observed with regard to Mother Goose and Valses nobles et sentimentales: after the original version for piano, the work was transcribed for orchestra and mounted as a ballet.  This work is one of the first works that indicates the impending arrival of Ravel’s second period. The works in this period are more economical in nature, not as “lush” as the early period works such as Rapsodie espagnole and Daphnis et Chloé.

A certain austerity begins to show in the later works of Ravel. Also important is a increasing interest in linear motion, as well as the use of bitonality. These attributes are first seen most clearly in the work that Ravel himself considered to be the turning point: his Sonata for Violin and Cello (1920).

Recall that two events had a tremendous influence on the composer at this time: his first-hand experience of World War I, and the death of his mother in 1917, from which he never recovered. From this point on, his output slows considerably. As you listen to the opening movement of this remarkable work, try to conceive of orchestrating the highly pianistic writing; for good reason Ravel is considered one of the greatest masters of orchestration in the history of Western music. 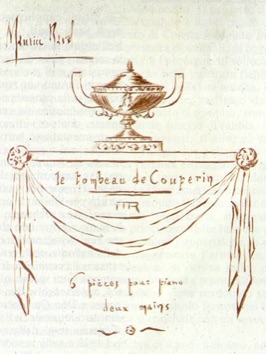